The Top Five Lottery Movies that are Recommended to Watch

Winning the lottery is probably a big wish for most of you out there. There’s nothing stopping you from dreaming about fortune, after all. Now you can feed your fantasy on what it is like to win a lottery through various lottery themed movies. Maybe bet on the numbers used in the films as your inspirational digits on your ticket.

Buying tickets online is easy, saving you the time and hassle of going to the shop. On CompareLotto.com, there exist a variety of lotteries from which to choose when playing the lottery - and from anywhere in the world! The online results are updated as lotto draws take place every day of the week.

Even if you’re not a fan of lotteries, lotto films can be real entertaining to watch. Some movies feature the good side while others show the potential complications of winning the lottery. These films often demonstrate exactly what people can be capable of when jealousy takes hold…

Motivation and commitment are key if you are ever going to win the lotto. Check out these entertaining cinematic gems about lottery winners if you’re looking for a boost of enthusiasm and faith before your next lotto game.

It Could Happen to You

Based on a true story, this 1994 movie is a combination of a love story and how fate can change people’s lives. Nicholas Cage plays a hard-working policeman, Charlie Lang who does not have change for a tip. He promises to share a lottery ticket with the waitress Yvonne Biasi played by Bridget Fonda. The lotto coupon bore the numbers 6, 8, 12, 16, 26, 64 winning a staggering $4 million reward. Lang's wife, Muriel tries to persuade him not to honour his promise but Charlie does what he thinks is best ...

All About the Benjamin 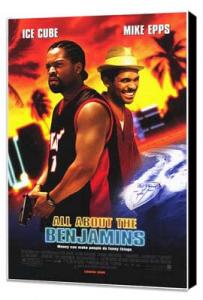 All About the Benjamins

The name of the film comes from the P. Diddy song ‘It’s all about the Benjamins’ that came out in 1997. This comic thriller released in 2002 features Ice Cube who plays a bounty hunter, Bucum Jackson. His next target is Reggie Wright (Mike Epps), a hustler who plays the lottery with numbers 15, 30, 37, 38, 45, 47. He wins the lottery only to find out he is being pursued by Bucum.

To avoid getting caught Reggie hides in a van driven by two murderous thieves who set off with $20 million worth of diamonds. Reggie leaves his wallet by mistake that contains his lotto ticket in the van. So the hunt is on for Jackson and Wright to find the van with the precious gems and lotto ticket. The film co-stars Eva Mendes, Carmen Chaplin, Jeff Chase and Bow Wow.

This film released in 1998 is set in an Irish village called Tulaigh More. Ned Divine played the lottery with the lucky numbers 4, 7, 19, 25, 29, 40 and died of shock when he found out he won. The lucky winner did not claim his prize of a whopping £7 million and the villagers seek to find out why. Upon discovering Ned’s tragic fate, his two friends plan on how they can claim the reward. Until the Lottery inspector arrives on Ned Divine's doorstep…

A 2010 comedy film features the rapper Bow Wow playing the role of Kevin Carson who wins the jackpot of a massive $370 million. He has to protect his lotto coupon over the weekend after the word spread with the neighbours that he had won. There are hundreds of ways how the lucky coupon can get into the wrong hands. Unfortunately, the lotto claims office will not open until Monday...

This film made was inspired by the Pennsylvania lottery scandal in 1980. A comedy film released in 2000 starrs John Travolta as the celebrity weatherman, Russ Richards. He invested in a snowmobile company that had already been struggling due to the warm weather. Russ’s friend Gig (Tim Roth) advises him try an insurance scam but ends up in debt. Gig convinces Russ to rig the lottery with help from Crystal Latroy (Lisa Kudrow). Richards asks someone else to buy the ticket with the winning digits 7, 9, 16, 11, 27, 70.  What happens after is worth leaving unsaid as it will ruin the fun in the movie.

Are you looking for an entertaining film to watch? Whether it is comedy, romance or a thriller, keep popcorn at the ready. On top of that, do not forget your lotto ticket in your hand for the chance to win amazing prizes.